skip to main | skip to sidebar

Sneakily delicious dishes that bring all the omnivores to the yard! Look for the cookbook in 2010! 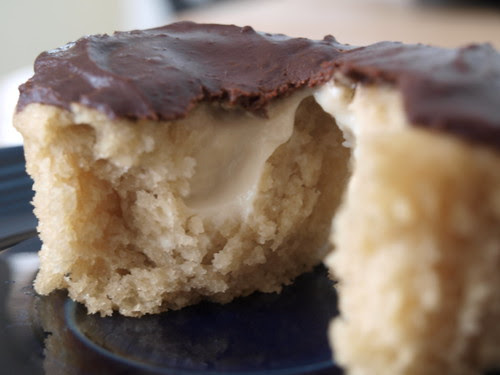 I've recently made a wonderful discovery -- most Jello Instant Puddings are vegan. The milk you would usually make them with isn't of course, but that can be remedied. Soy milk doesn't have enough fat in it to get the pudding to set up, but coconut milk has enough and more! In place of the 2 cups cow's milk called for, I make it with 1 1/2 cups coconut milk and 1/2 cup soy milk, and voila! Instant vegan pudding.

I don't like to eat the pudding straight as it is, with that amount of fat in it {although it's good for getting some extra fat and calories into Supertoddler on days when he's not eating enough}. However, pudding made in this manner is PERFECT for filling cupcakes.

In the cupcake pictured above, I used the Golden Vanilla Cupcakes recipe from Vegan Cupcakes Take Over the World, poked my finger in the middle of the cooled cupcake, and piped the pudding right into the middle. I then covered the cupcake with gnache {you can also use vegan buttercream frosting}. It resulted in a delicious "Boston Cream Pie" cupcake, perfectly rich and decadent.

I've gotten dozens more compliments on my cupcakes since I started filling them with pudding, and little do they know...I cheated. Shhh...don't tell.
Posted by Batgirl at 9:56 AM

Batgirl
Batgirl lives and cooks in Sandy, UT with her ninja-husband and super-toddler. In addition to cooking for and feeding her loved ones, her interests include computery things, video games, comic books, reading, and getting into mischief of one sort or another. When she's not saving the world, she's working on her forthcoming cookbook, Vegancognito: 153 Sneakily Delicious Dishes That Bring Omnivores and Herbivores to the Same Table.